A Musical History of Steve Messer:
I grew up in a musical household in Melbourne, Victoria, but somehow missed out on the music lessons my brothers had. Hymns and classical music were what mum listened to, but my older brother Dave introduced me to ‘non-commercial’ rock. When I discovered ABC radio’s “Room to Move” on Monday nights, there was no turning back.

When ejected from the school recorder band with a bop on the head from a descant-wielding conductor, I turned my attention to drums for a few years. I then started to teach myself the harmonica having discovered the blues of Sonny Terry & Brownie McGhee and Muddy Waters. Scripture Union ran a four-week folk guitar course at the Master’s Workshop in Richmond. One of the instructors was Peter York and I learned enough chords to begin figuring out what was happening on the blues records I’d been listening to.

In 1981 I began a teaching career at Nhill in Victoria’s Wimmera region. I was introduced to the guitar playing Kube brothers, Andy and John. Together we formed “The Okee-Dokees” and I started playing mandolin. Bluegrass and old-time “brother-style” country music became a new musical direction as we covered songs from Bill Monroe, the Stanley Brothers, Flatt and Scruggs and non-household names, such as Cecil Surratt’s West Virginia Ramblers, Alfred G. Karnes and the Caudill family. See what happens when your brother introduces you to non-commercial music!

The Okee-Dokees played all over western Victoria from Portland to Echuca, Horsham to Kaniva, Jeparit, Kinimakatka and many post-codeless places in between. Following a feedback drenched performance at a bonfire night in a paddock at Wilkur South, relayed from our back-of-a-truck stage through one mic into a 3-watt amplifier with a single speaker the size of a dinner plate, we were told we sounded like a High Frequency radio message from the South Pole. Having never heard a HF radio message from anywhere in Antarctica I can’t be certain if that was a compliment. I am pretty sure it sounded non-commercial.

My wife Jenny and I moved our family to Drouin in West Gippsland in 1986. I met Steve Camp who brought with him his acoustic guitar, unerring harmony singing and a willingness to be introduced to non-commercial music. When we met bassist Rod Boreham, “The Green Pastures Boys” band was born. By this time I’d begun writing original songs and these began trickling into our set lists.

Peter York rang in 1987 and asked me to participate in a songwriters’ night organized by Steve Leslie. The band assembled for the occasion included Darryl Thompson on guitar and drummer Tim Gleeson. That led to Peter, Darryl and Tim joining an occasional electric side-project “The Beat Preachers”.  Not long after this I met Dave Diprose, a flat-picking, bottle-necking, singer song-writing veteran of the Melbourne scene who sat in with the “The Green Pastures Boys” on a few occasions before Rod and I joined him in forming “True North” with Darryl and Tim, while Steve Camp took leave to attend to an expansion of the herd both inside and outside of the house at his dairy farm. During this period work began on my first album. Following the early recording sessions, Tim Gleeson departed to be replaced by Phil Bosua on drums and it was this lineup which completed the “Work & Church & Saturday” album. The cassette was released late in 1992 with contributions from Peter York and banjo/fiddle wiz Lionel Holt and others.

When Phil accepted an invitation to tour with Steve Grace and Darryl set off with his family and others on a motor home musical venture, “True North” band dissolved leaving Rod Boreham and me to re-unite with Steve Camp as “Strange Country”. The name seemed to sum up the band’s music, related to descriptions of Australia made by early travellers and hinted at the pilgrim nature of following Jesus which is the music’s foundation.

In 1995 I was invited to do a three-week tour in Alberta Canada playing at rodeos, Cowboy Church gatherings, gospel music jamborees, the first Nuclear Test Veterans and Atomic Bomb Survivors’ Conference and a native American tent revival. Steve and Rod couldn’t make the trip, so Peter York and his wife Willemina joined me, after which Peter became a regular member of “Strange Country”. We performed for the first time at the Tamworth Country Music Festival in 1997. By the time of my second album, ‘Strange Country’ (1998), Darryl had returned from his overland adventure and rejoined the band. The album featured, alongside the regulars, drumming contributions from Phil Bosua and the Paul Colman Trio’s Phil Gaudion, Melbourne jazz piano great Tom Hanssen and acoustic and electric bass by Dave Williams.

A tour of Gippsland with Steve Grace in 1997 gave my son Andy his first taste of live drumming, and he became a regular on-stage member of the band. A highlight of the trip to Tamworth in January 1999 was a last-minute decision to enter the Hohner Golden Harmonica competition. We turned up three quarters of an hour after the contest had begun, but with Strange Country preferred to the house backing band, I managed a surprise first place! For the contest in 2000 I rehearsed versions of “Jesu, Joy of Man’s Desiring” and “Orange Blossom Special” and won again. After that, I was asked to judge the award a couple of times. In 2002 we were part of an ABC radio ‘Local and Live’ concert broadcast across Victoria. It resulted in one CD sale confirming our non-commercial status.

The band has had lots of comings and goings around the core of Steve, Rod, Darryl and me. Paul Rooney joined in 2000 and stayed for over a decade. When his baking career made playing at night unworkable, Andy Messer left and Michael Stritch took over on drums. Andy still filled in when required. Other regular long-term contributors have included Dave Gleeson (violin), Chuck “Telewrecker” Van Den Belt (guitar), Peter Morison (violin), Dan Mason (saxophones), Gerry Holmes (keyboards and guitar) and Garry Adams (guitar). We’ve also made lots of musical friends and have backed a number of artists in need of a band, including Terry Darmody, Bruce O’Hara, Mark Moulynox, Wendy Cochrane, Andrew Phelan, Jan Bentley, Karen Lynne and Martin Louis, Roo Arcus, Dale Juner and more.

My third album of originals, ‘Country Bazaar’, featured guests including Chris Tabone (ex Badloves) on drums and Tamworth session ace Mark Moulynox on pedal steel. This album made the top five in the Victorian Country Music Association awards in several categories and our version of ‘Orange Blossom Special’ won a finalists’ nomination at the TIARA awards in Tamworth.

In 2008 we released ‘It’s Real’, an album of ‘righteously blue gospel-a-billy’ with our Sydney-based mate and frequent collaborator Terry Darmody. We played together every year at Tamworth and he made fairly regular trips south. I said to him after a set at Tamworth’s Scripture Union Gospel Tent, “We ought to record some of these things”. He replied, “If we don’t, no one else is going to.” Terry and I chose the songs from the many gospel classics we’d enjoyed over the years. Some of my choices went back to Ordinary Brothers and Okee Dokee days. John Rees (ex Men At Work) joined us on bass on a couple of cuts. Terry tried to get some copies into a Sydney record store specializing in roots music but was told the album’s content was “offensive”. On the other hand, Melbourne’s leading Christian bookshop would not stock it because they didn’t like the cover. Talk about non-commercial!

I’ve continued writing and the band has continued performing, but that’s all the recording we’ve done for now (as at 2022). Darryl Thompson and I have contributed to quite a few recording projects for others. Hopefully it won’t be too long before we get something of our own ready for people to hear.
– From the Songs of Faith Hope And Love dot com website 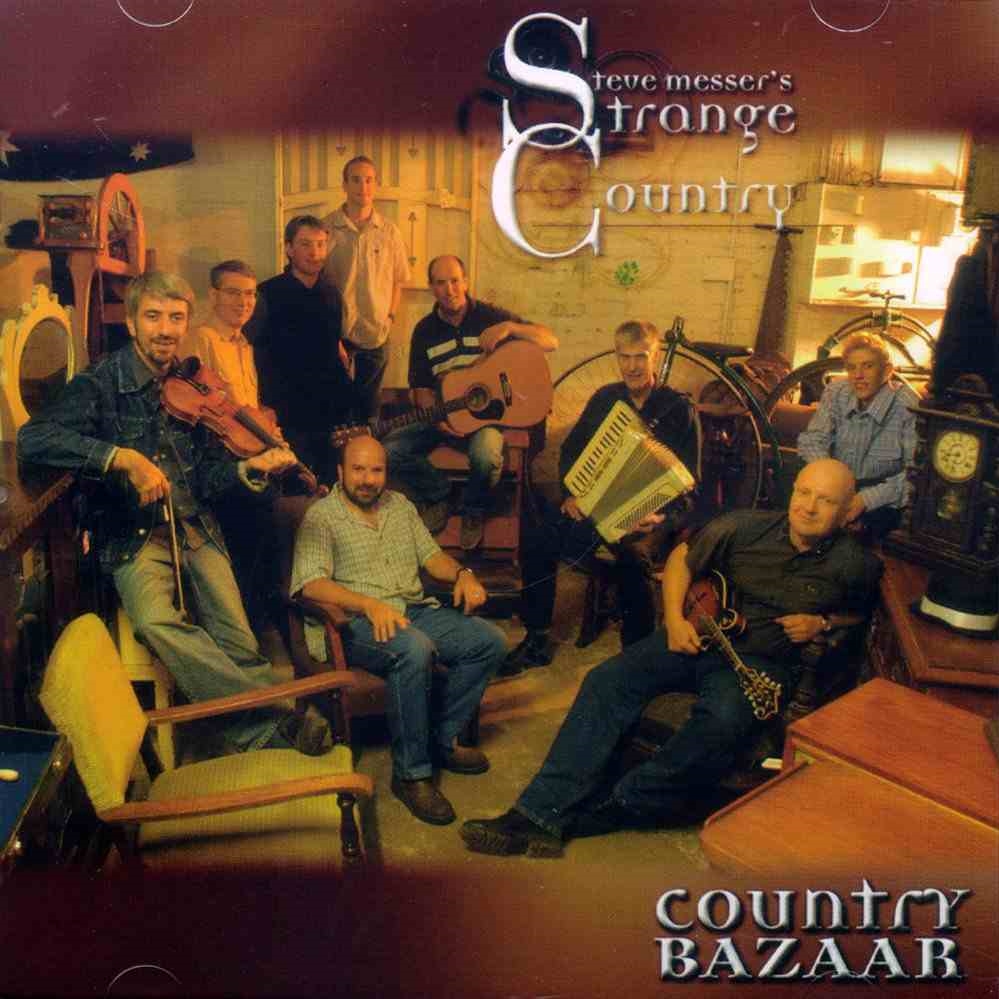