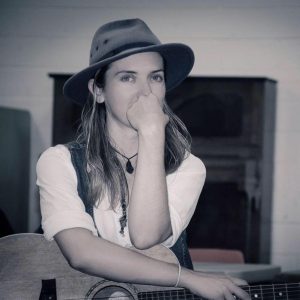 Singer of songs. Teller of truths.
Writer of wrongs. Giver of goods.
Lover of life. Hoper of height.
Maker of might.
Child of Christ.

Pepper Jane and her guitar, Maureen, present a cross-genre repertoire of favourites, surprises and originals that swing from lofty folky croonings to belted lashings of aural delights.

Growing up on a mixed enterprise farm on the Darling Downs, Pepper was singing from a young age, in churches, choirs, musicals, showers, on pushbikes and a tree stump at the bus stop. She has retained a little classical training via some of these ensembles, and some people also got paid to teach her speaking, ivory tickling and cat strangling (not literally, metaphore-proof animal lovers).

Around age 14, the sporadic Miss Jane began a new woody, wiry misdemeanour, learning some guitar chords and penning a few tales of woe and misdirection. Some (undisclosed) years later she picked up a guitar, this time loitering with actual intent, and began cultivating the charismatic purveyor of honesty that is Pepper Jane.

Meanwhile, after doing the purportedly civilised thing (uni), a less-civilised few years pouring beers, then a few ‘real’ jobs (though no real haircuts) as an agronomist (bingoogle it), ‘the itch’ remained.
– Real Life

The individual itch we all have in our soul that hints at what we’d actually be doing with our life if we really liked and honoured ourselves. An itch no salary, company car or topical cream can dissuade.

So, after 2.5 minutes onstage in an outlying tent at the end of a (regular) brick road at Woodford Folk Festival on New Years Day 2014 and unfortunately dry summer, the time had arrived to leave agronomy, pizza delivery, pouring beers and workaholism behind. To chase the dream. Nay, to live it.

These days she even writes some happy songs…
– pepperjane.com.au